Please click here to read and download our PDF brochure showing readers from the most recent Poetry Book Fair. Or else scroll down for full details... 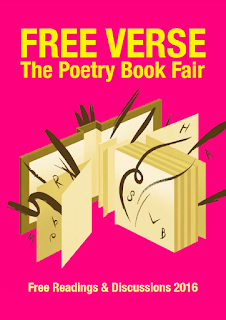 10.30       Discussion: Meet the Editors!
Find out what editors really want! Let them tell you what they excites them most, find out what to avoid, and get the chance to ask them some questions. With Adele Ward of Ward Wood Publishing, Ed Doegar of The Rialto, and Jennifer Grigg of Green Bottle Press.

11.00       Seren
Caroline Smith, Kate Bingham, Judy Brown, Rosie Shepperd
Four Seren authors will be reading at the Fair this year: Judy Brown (her Crowd Sensations was a PBS Recommendation for Spring), Kate Bingham (Her third collection, Infragreen, arrived in 2015); Rosie Shepperd, whose recent debut is The Man at the Corner Table; and Caroline Smith, whose The Immigration Handbook is a beautiful and compassionate book that reflects her work with immigrants. Introduced by Seren Poetry Editor, Amy Wack.

11.30       Templar Poetry
Ian Harker
Goldfinches gatecrash Old Master paintings. An astronaut discovers that stars are not quite as he expected. TS Eliot steams out to sea disguised as an ocean liner. A caretaker realizes he’s the happiest man alive. Journeys from the Paris Métro to Blackpool Pleasure Beach to the North Face of Everest, these poems reveal miracles in many guises wherever they take us. Ian Harker’s debut short collection won the Templar Pamphlet Award in 2015.

15.30     if p then q
Philip Terry, Stephen Emmerson
Philip Terry is Director of the Centre for Creative Writing at the University of Essex. A new volume of poetry, Quennets, is out now from Carcanet in 2016. His if p then q collected Advanced Immorality contains an antonymic translation of Queneau’s Elementary Morality. Stephen Emmerson’s numerous publications include two with if p then q. His Poetry Wholes is a set of templates to make your own poetry and Family Portraits is a sequence where you, the reader, look inside the mirror.

11.00     Children’s Event!
The Emma Press
Space and Aliens: Poems for Children
(for 6+ but suitable for all ages)
Poems from a new anthology Watcher of the Skies: Poems about Space and Aliens and featuring readings from Lawrence Schimel and Kate Wakeling.

11.30     Children’s Event!
Paper Swans Press
Behind the Bikesheds
14-18 year-old-readers from Paper Swans Press and poets from the anthology Schooldays, which is a collection of poems about the shared experiences of school and youth, the nuances and memories that make you laugh, but very often cry.

15.30     Poetry Space – Jade Anouka
Jade Anouka reading from her pamphlet collection Eggs on Toast published by Poetry Space in January 2016. Jade is a performance poet and actor. “Jade’s beautiful poetry is no frills. Brave, raw and exposing, Jade’s writing is an open book where the words are carefully plucked pearls, fit for the neck of any human just growing, falling and making their way in the world.” - Poet/Author Laura Dockrill

17.00     Competition Winners
To be announced! The winners of this year’s Poetry Book Fair competition will read their poems, as well as a few other poems of their own. Come and make them feel welcome!

19.30     smith | doorstop
Nigel Pantling
Nigel Pantling published his debut poetry collection, Kingdom Power Glory, with smith|doorstop Books in May 2016. He was a soldier in Northern Ireland during the early years of ‘The Troubles’, private secretary to Ministers in the Home Office during the most turbulent year of the Thatcher Government, and a merchant banker in the 90’s when privatisations and mergers and acquisitions were rampant. The collection draws on his extraordinary working life and the danger, the absurdity and the human frailty that he has seen at first hand.

20.00     Carcanet
Karen McCarthy Woolf, Martina Evans, John Clegg
Readings from three Carcanet poets. Poet and Editor Karen McCarthy Woolf, born in London to an English mother and a Jamaican father, reads from An Aviary of Small Birds. London-based poet and novellist Martina Evans, who grew up in County Cork, reads from The Windows of Graceland. John Clegg, who grew up in Cambridge and currently works as a bookseller at the London Review of Books bookshop, reads from Holy Toledo!